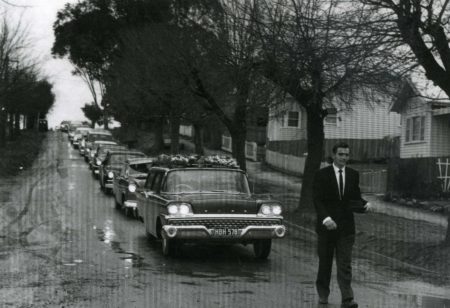 The origins of Heritage & Heritage Funerals began with Frank Sperry Heritage who commenced business as a Funeral Director in 1934. Operating from 102 Maroondah Highway in Healesville, Frank provided funeral services to the families of the Yarra Valley.

Both Rob Heritage and his brother Keith worked alongside their father from an early age.  At age 10, Rob would arrive home from school each day and light the pitch pot which was used to seal the bottom of coffins, he would trim coffins, make nameplates and wash cars.

In 1954 at the age of 14 Rob started working full time alongside his father on funerals including transferring of the deceased, making funeral arrangements and even carrying coffins to the graveside and by 1956 the business was renamed Frank Heritage & Sons. Interestingly at this time The Heritage family not only operated their funeral business but also operated the local Taxi service and Ambulance service in Healesville.

In 1958 when Rob was aged 18 he decided it was time to branch out on his own and opened up in Lilydale at 424 Maroondah Highway. Rob operated under the name Robert (Frank) Heritage Funeral Director and whilst Lilydale was his own business he continued to work closely with his father and brother in Healesville. They often shared the use of cars and worked together on funeral services whenever it was needed.

The early 1960’s were a busy time for Rob who whilst continuing to operate as a funeral director in Lilydale also had many other jobs including driving the local school bus, driving logging trucks, working in the timber industry and working at the cemetery as a grave digger to name a few.

With the passing of Rob’s father Frank in 1964 Rob and his brother Keith bought the Healesville business from their mother and began to operate both the Healesville and Lilydale offices in partnership. In 1965 they purchased a parcel of land on the corner of Queens Rd and Maroondah Highway in Lilydale and commenced building their own chapel which opened for use in 1967.

In 1968 another parcel of land was purchased at 132 Mt Dandenong Road in Croydon for a third office and another chapel, this opened for business in 1970. Over the next 15 years both Rob and Keith continued to operate their 3 locations of Healesville, Lilydale and Croydon and continued to provide funerals services for families throughout the Yarra Valley.

After a few years Rob, missing being able to help families, made the decision to go back into funeral directing. In partnership with Jim Harper, Rob purchased some land at 733 Boronia Road in Wantirna in 1994 and by 1997 the Wantirna office and chapel of Heritage Harper Funerals opened for business. By this time Rob and Jim were also joined by Rob’s son Gavan. After a few years Rob and Gavan came to an agreement with Jim to buy him out and the business officially became what it is today operating under the name ‘Heritage & Heritage Funerals’.

Feeling the need to be able to better service the families of the Yarra Valley area a second parcel of land was purchased in the late 2000’s at 1416 Healesville – Koo Wee Rup Road in Woori Yallock.  A new office and chapel were opened in 2009 and the new chapel was at that time the largest chapel in Victoria. As a tribute to his background and love of the timber industry Rob designed the new Chapel in a timber theme as tribute to those lost in the industry which is such a large part of the Yarra Valley.

Today Rob continues to uphold his proud history of professional funeral care and continues to provide kind and caring service to all families throughout the Yarra Valley and South Eastern Suburbs alongside his son Gavan, daughter Janet and grandson Lachlan.